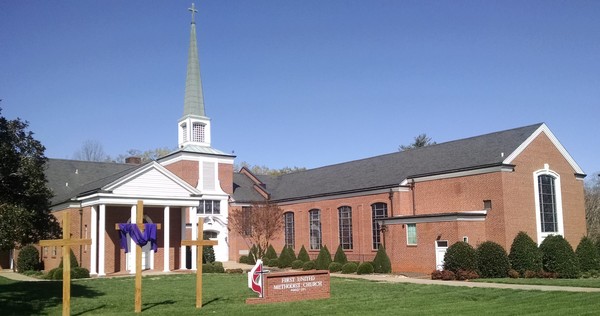 The First United Methodist Church of Forest City celebrated its 125th Anniversary in 2014.  The committee charged with recognizing this milestone worked hard to make this year very special.  When this committee was formed, they selected the theme "To God Be the Glory" using the word from a hymn by Fanny Crosby written in 1875.  As we look at the history of this church, it is abundantly clear that God has done great things at First United Methodist Church.  We remember and celebrate and give Him the glory for what He has done, for what He is doing and for all that He promises to do.

Many know only this location on Main Street, Forest City as the First United Methodist Church.  However, there is a deep history of growth that began in September 1889 when Forest City Methodist Church was organized.  The first church building was completed in the spring of 1892.  The second building was completed in the latter part of 1915.  This second building served as the predecessor for the current location and saw much growth in membership, programs, and community service.

In the late 1940s, the idea for building a new church facility began with the vision of continued growth.  The current lot on Main Street was purchased in January, 1950 and the church planning began.  The Ground Breaking Ceremony was held Sunday afternoon, August, 1954 and construction began the next day.  In December, 1954 the name was changed from Forest City Methodist Church to First Methodist Church of Forest City.

On March 13, 1954 a processional occurred from the old church to the site of the new church for the Service of Laying the Corner Stone.  Some of those who made that trek down Main Street are still with us today.  These individuals, their families, and fellow church members watched the construction and the first service in the new church was the first weekend in December, 1955.  This first service was a 24 hour prayer vigil.